Editorial Note:  This blog sings the praises of fresh greenery and tries to dispel some of the misconceptions about fresh greenery. But it does not mean I am against artificial trees.  I just want to help those interested in fresh to learn enough to be comfortable and safe with real greenery.

When it comes to Christmas, I’ve got to have that fresh cut Christmas Tree and the wonderful scent that fills the house. When my son was young and we were living in West County, St Louis, MO, it meant driving to Herman, Missouri to a Christmas Tree farm to pick out just the right tree. We always hoped there would be snow on the ground and ice in the streams that we drove through to get to the field.  And, as tradition would have it the trip finished with a stop at a favorite German restaurant in Herman. Eventually, it became our dream to own a Christmas Tree Farm.

Making Our Dream A Reality

Fast forward many years, our son is grown, and we are leaving South Dakota to live in Southwest Iowa near Sidney. We found in the Loess Hills a beautiful valley with hills all around. It became our home and the dream of a Christmas Tree Farm became a reality. Five years after the first trees were planted, we opened for business.

What I didn’t expect in those first years was the reluctance in the area to buy a real tree. Being the only farm for many miles, the real tree buyers went to the tree lots and picked out a tree that too many times dried out very quickly. A downer was the dried needles that became very prickly.  Additionally, the news stories abounding every year of the dangers of fire in a real tree, make people cautious.

Our business grew slowly but steadily. By the time we closed our doors, 20 years later, we had several hundred regular customers. They understood that fresh does not have to mean dangerous. And that fresh can mean so many lovely things for our homes during the holidays.

Real Christmas Trees – Past and Present

Early last century, there were no artificial trees. You either had woods close by where you could go to cut down a tree or you went to a tree lot. Tree farms would begin cutting trees in early September and pile the trees into ponds to keep them fresh. By the time they reached the tree lots they had already been dead for several months. History shows that decorations started out as burning candles and progressed to electric lights. The electric lights burned very hot. That was a perfect combination for a fire. Tragically, Christmas Tree fires happened too often, hence fueling the fire for the ‘dangerous Christmas Tree” narrative that we still hear today.

There are still tree lots and trees are still bought there. But today, wholesale farms have bigger and better equipment that allow tree cutting to take place much closer to Christmas. The trees are stored in refrigeration that helps stop water evaporation.

When you cut down a real tree and take it home, in a normal year the trees are full of water and the cells are still functioning.  It takes at least a month for all of the water to evaporate from either pre-cut or fresh cut trees. 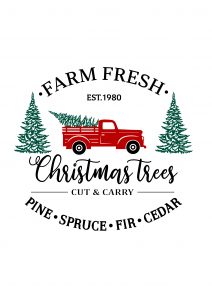 Fresh cut trees can fill your home with the beautiful scent of the forest.

When you are buying a pre-cut tree, buy the heaviest one you can find.  A lite tree means the water is already gone.

Everyone knows to keep the tree trunk in water but, if you don’t do it right, it is waste of time. Once a trunk is cut, the first thing that happens is a sap film forms over the end of the trunk. This is helps keep the tree from drying out. No water can be absorbed by the tree once the sap thickens.

Cut an inch off of the trunk and then put the tree directly into the hottest tap water you can get.

The freshly exposed end of the trunk has xylem cells (water tubes) that are still open. They transport water to the rest of the tree. The hot water keeps the sap from hardening keeping the xylem cells open.  A pre-cut tree will still absorb water just not as much as the fresh cut tree. Through the duration of the tree residing in your house, always use hot water.

I have had trees during drought years absorb a lot of water.  Continued water for the tree will help keep it soft and tremendously reduce the chance of a fire.

Cool burning Christmas lights are so much safer.

All of the above helps keep a tree that is soft to touch and safe in your home.

On You-Tube you can find videos of local fire departments testing out fire dangers. They all have the same results: A tree cut by you takes the longest to start and usually doesn’t burn as fast. A pre-curt tree burns the fastest but will be slow to start the more water it has in it. Artificial trees will burn and some of the chemicals used in making them produce fumes that are poisonous.

Centerpieces, garland, and wreaths: Use greenery that grew in a similar climates as yours

Knowing which greenery to use can make such a difference in how long these decorations stay fresh. I love some of the west coast greenery especially from Washington and Oregon but it comes from a climate that is milder and the needles even though they are evergreen freeze, die and turn brown very quickly. Using greenery that comes from a climate similar to where you live is so much better. I live in the Midwest so scotch pine, white pine, the local firs are not as sensitive to freezing and stay green much longer.

This is especially important for garland and wreaths.  They can’t be watered and after one or two freezing nights, if not the right type of greenery, they begin to turn brown.

Water both outside and inside arrangements of evergreens

It doesn’t matter that the trunk is gone, the branches used in these arrangements will still soak up water and keep the needles alive.  I have had decorations using real greenery in my house from Thanksgiving into January stayed remarkably fresh because I water them.

Now it is time for me to stop writing and start decorating for Christmas.  I so look forward to putting up the tree today and enjoying the scent filling my house. Have a joyous Holiday Season.